‘Jin, jiyan, azadî’ (meaning ‘woman, life, freedom’) is a slogan that emerged from the Kurdish freedom movement. It has characterized the revolution in Rojava (Western Kurdistan, or the Kurdish regions of North and East Syria), which began in 2012. Today, it echoes across Iran, as a protest movement sparked by the murder of Jina Amini, a Kurdish woman, by Iranian “morality police” continues.

What Makes a Women’s Revolution?

The uprising in Rojhilat and Iran can be described as a revolutionary movement because, as summarized by James DeFronzo, it is a social movement in which participants endeavor to change or replace existing social, political, and economic institutions profoundly.

Four factors are relevant here. First, this uprising is a women-led mass movement, represented by the radically democratic and egalitarian slogan ‘jin, jiyan, azadi.’ Most, if not all, of the major social and political institutions in Iran are structured along patriarchal lines. The protest movement aims to destroy these institutions and replace them with a system built on gender equality and freedom for women. This is necessarily a revolutionary change.

Second, the egalitarian meaning behind the phrase ‘jin, jiyan, azadî’ also represents a transnational emancipatory struggle in Iran and Rojhilat. In other words, this slogan has become a rallying cry for a kind of inter-communal or transnational solidarity among all ethnic groups of Iran. It has broken with the exclusionary boundaries of the nation-state and transcended ethnic, religious, linguistic, gender, racial, and class lines to present people with real opportunities for unity. Not only are men and women holding hands, marching, and  chanting ‘jin, jiyan, azadi,’ together, but so are diverse ethnic and religious communities.

Third, the motivational pull of the phrase ‘jin, jiyan, azadî’ has mobilized a larger-than-expected segment of the population. People are joining this revolutionary movement by participating not only in peaceful demonstrations, but also in acts of nonviolent civil disobedience, such as labor stikes. Workers in a wide variety of fields have begun to engage in strikes to support the protests, particularly in Kurdish regions. Three days of national strikes are planned to begin this week. The intensification of this aspect of the revolutionary movement will be essential for its survival and possible success. If the protest movement can last, then the forces of striking labor may tip the balance.

Fourth, these protests constitute a revolutionary movement because they do not aim to reform or seek representation within an existing system. The protestors are striving to end the 43-year-old theocratic totalitarian regime of Iran, and to replace the existing social, political, and economic institutions of the nation-state with more egalitarian forms of social and political order. While recent comments about suspending the morality police hint that the regime may make concessions, these will not be enough to satisfy the demands of this movement. They may be seen by protestors as a show of regime weakness that could inspire further action.

‘Rojhilat is not alone, Kobani is with you:’ Revolutionary Connections

As a revolutionary movement, the protests in Rojhilat bear striking similarities to some aspects of the Rojava Revolution. In Rojava, Kurdish-led revolutionary forces replaced the repressive institutions of the Syrian regime with more democratic ones without direct confrontation. At present, the overall governing structure of the Syrian regime has been either profoundly changed or been replaced in areas under the control of the Autonomous Administration of North and East Syria (AANES).

The slogan ‘jin, jiyan, azadi’ has come to represent both revolutionary movements. They both enjoy a strong degree of female leadership and share the aim of overcoming patriarchal domination, whether it originates from states and armed groups or within society. This is evidenced in both the form and nature of their respective popular uprisings and in shared cultural practices.

Women from around the world were so inspired by the bravery and prowess of the Rojavan Women’s Protection Units (YPJ) in their war again ISIS that some of them went to Rojava to join the fight. While it is difficult to ascertain precise numbers, many of the women who joined were from Rojhilat. In a 2015 BBC News documentary, Inside Kobane: Keeping Islamic State at Bay, we see interviews with YPJ fighters from Rojhilat. In one interview, a female interviewer says “I’ve met so many Kurds from Iran today” and a Rojhilati YPJ fighter responds by saying “there are lots of us here. When we’ve freed Kobane, we’ll be off to Iran.” She then gives the interviewer a hug.

Rojhilatis and Iranians that were not able to join the fight in Rojava still expressed solidarity in other ways. For example, they bravely held a number of rallies in support of Rojava in Tehran and Tabriz in 2014. Since then, the people in Rojhilat and Rojava have been communicating and expressing solidarity through mutual proclamations of support. On September 12, 2017, hundreds of people from the Jalabiyan district in the Canton of Kobani came together holding banners reading “Rojhilat is not alone, Kobanî stands with you.” During Turkey’s 2019 offensive into Rojava, the people in Sine (Sanandaj) also gathered at Iqbal Square on October 12 chanting “Rojava is not alone, Rojhilat is with you.” And then, on September 26, 2022 hundreds of women marched in Kobani to show their solidarity with the women in Iran and Rojhilat. They cut their hair and chanted ‘jin, jiyan, azadi.’ There appears to be a strong sense of mutual solidarity between Rojhilat and Rojava.

The revolutionary solidarity between women in Rojhilat and Rojava is found not only in combat or the streets, but also when it is appropriate to mourn the loss of a sister and heval (comrade). Living under the banner of ‘jin, jiyan, azadi’ allows funerals to serve as both religious rituals and political demonstrations. Movements for Kurdish liberation often portray mothers as creators and protectors of revolutionaries-to-be, and Kurdish mothers have been included in everyday resistance and political struggles. They are the founders of the democratic nation for which fighters and protestors struggle.

Today we see Rojhilati mothers mourning in much the same way Rojavan mothers did during their fight against ISIS and still do in their ongoing struggles against Turkey and its allies. They mourn their lost children not as passive victims, but as immortal martyrs for a revolutionary cause: martyrdom is the renewal of the oath of resistance to the patriarchal tyranny of the nation-state. Mothers chant ‘şehid namirin’ (martyrs never die) as they bury their children in Rojhilat and Rojava. Private tears are replaced with public dancing, marching, and the singing of heroic songs. This is how the mothers of martyrs become the mothers of the democratic nation. They foment the revolution by rendering their children’s funerals rituals of remembrance and resistance.

For example, recently we have seen the mother of Simko Moludî, who was shot to death by Iranian security forces, holding a red cloth in one hand and a red rose in the other, dancing while burying her young son. Another video shows us the dancing mother of Milad Zarei, another murdered protestor, during the 40th-day commemoration ceremony for her son’s funeral. Perhaps most powerfully, there is footage of a group of Kurdish mothers marching and singing together, arms linked, during the funeral of Jafar Ghorbani. And, of course, it is not only mothers who mourn the deaths of their revolutionary children. The father of a 16-year-old boy, Kodar Duroftadeh, said during his son’s funeral that he is happy that his son was sacrificed for the soil and freedom of Kurdistan.

It is hard to believe that these funerary displays, which so many Rojhilatis have seen Rojavan mothers perform during the past ten years of their fight for autonomy and equality, have not influenced and encouraged them to view their own struggles against Iran in a similar light. It is also hard to believe that those Rojhilati YPJ fighters have not returned to Iran with the goal of bringing the autonomy and equality they fought for in one part of Kurdistan to another. One of the main goals of the Kurdish liberation movement has been the internationalization of its struggle through building transnational networks of solidarity based on mutual respect, understanding, and defense. This internationalization has been taking place between the women of Rojhilat and Rojava.

It has been taking place between women around the world as well. In all corners of the globe, women have been inspired by the twin examples of the revolutionary movements in Rojhilat and Rojava. For example, over 700 women from 41 countries recently met in Berlin for a two-day international women’s conference where the concept of world women’s confederalism was discussed, alongside many other topics meant to deal with the threats that stem from patriarchy like femicide, ecocide, and genocide. The revolutionary movements in Rojhilat and Rojava have been directly confronting all of these threats, and both were held up as examples by women who participated in the conference.

Of course, the examples of Rojhilat and Rojava are not completely historically unique. Women have been essential players in all revolutionary movements since at least the French Revolution—though their contribution has often been downplayed. What distinguishes the revolutionary movements in Rojhilat and Rojava from other historical examples is that, in these cases, women either are equal partners and leaders in the revolutionary movement—or are simply leading it themselves. The hope is that not only will this motivate the emergence of women’s-led revolutionary resistance to patriarchal domination in the other parts of Kurdistan, but also in the wider Middle East and indeed the wider world. Wherever women suffer domination, which is in everywhere, the examples of Rojhilat and Rojava can serve as a catalyst for local resistance to the universal problems of patriarchy, inequality, and authoritarianism. 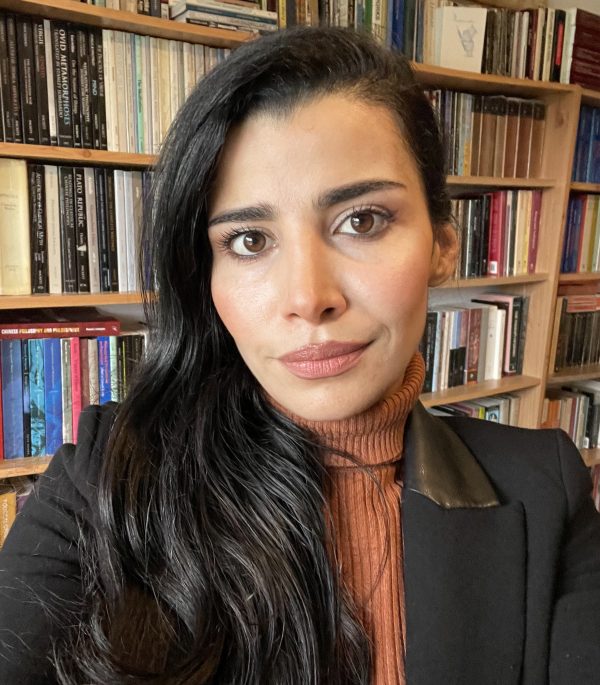 Rojin Mukriyan is a Ph.D. candidate in the department of Government and Politics at University College Cork, Ireland. Her main research areas include political theory and Middle Eastern politics, especially Kurdish politics. She has published…